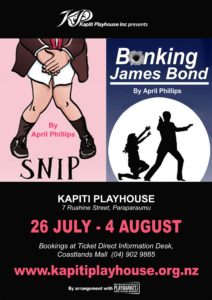 Frank’s wife wants him to have a vasectomy. His life won’t be worth living unless he gets the snip. What would a real man do? What would The Godfather do? Badda bing, badda boom, April Phillips’ sharp new comedy will have you in stitches!

A warm hearted comedy about Betty who, having just discovered her husband is having an affair, will do anything to save her marriage even if it means dipping into fantasy and enlisting the help of a secret agent. By the end of the play she has developed self-esteem and strength and realises that she doesn’t need her marriage in order to be happy April Phillips will be attending the Saturday 4th August performance and we will be holding a special Q&A session in between the two plays. Come along to meet and listen to April!