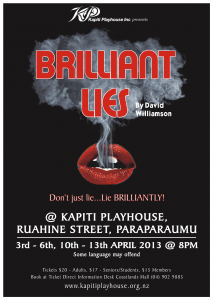 Kapiti Playhouse’s first production of 2013, Brilliant Lies by David Williamson comes to the stage in April. The play will be directed by Gennie Barton.

The theatre is located at 7 Ruahine Street, Paraparaumu.

Bookings can be made NOW at the Ticket Direct Information Desk in Coastlands Mall – Phone (04) 902 9885.

It begins as a seemingly cut and dried case of sexual harassment, but the more the conciliator Marion investigates, the more impossible it becomes to get to the truth. A manipulative woman fired from her job contends sexual harassment in hopes of snagging a settlement, while her equally manipulative former boss contends his innocence in hopes of protecting his assets. The battling parties take their cases to court, where a complex, engrossing series of conflicting flashbacks occurs.

This Australian drama follows the case that begins when recently fired Susy Connor files a formal complaint with the Anti-Discrimination Tribunal about an alleged incident in which her employer Gary Fitzgerald sexually molested her while working late one night. The married Gary, calls Susy a liar. Marion, the mediator, is called in to find the truth. Both parties have credible character witnesses, and at the same time, both have gaping holes in their stories. Susy, herself, with her sexy dressing, provocative ways, and her openness about an active sex-life, is not an obvious victim, while Gary is famed for his macho posturing around the office and his womanizing.

The Playwright, David Williamson, is a master of meaningful, punchy, and funny dialogue, and not one word is superfluous. The play develops with sharp interchanges, change of focus, and unexpected turns.

You can see photos of the play and keep up with our series of Bio’s at our Facebook page.

You can now listen to the Brilliant Lies radio ad at https://soundcloud.com/kapiti-playhouse/brilliant-lies-kapiti – Thanks to Beach FM 106.3 and www.beachfm.co.nz